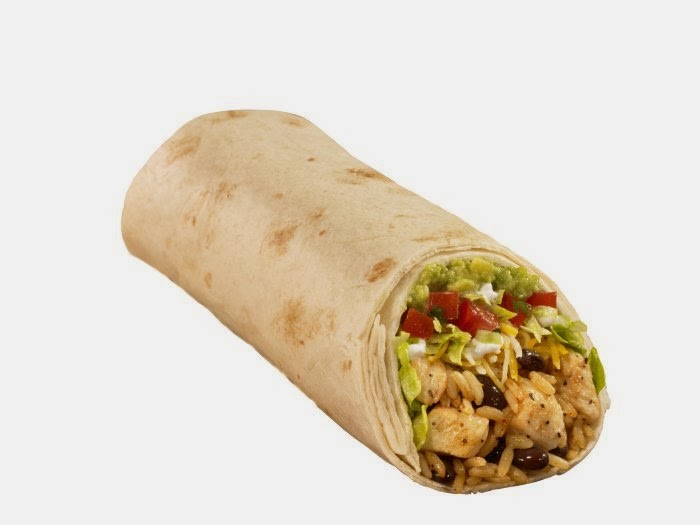 When it comes to quick, easy, portable, versatile and delicious food, burritos are
where it’s at! The best part of burritos is that you really can’t go wrong... just think
of your favourite combinations of veggies, beans, rice, potatoes, meat, they can
pretty much all be wrapped up in a burrito shell or pita wrap and taste amazing. It's
all about getting creative and finding different ways to wrap up breakfast, lunch or
supper. We've got a few simple recipe ideas here for you to start with.

For this burrito you will need veggies (try red and green peppers, corn, spinach, onions), eggs, cheese (optional), and sauce kind of sauce, like salsa, hot sauce, or guacamole.

• Finely chop your veggies into about 1cm (1/2 inch)  cubes and toss them in a frying pan on low-med heat, with just a bit of oil. Lightly sautéed the veggies until they are just a bit softened.

• While the veggies cook, crack your eggs into a small bowl (2 eggs per person is usually a good size portion) and whisk.

• Warm your burrito while you scramble this mixture, you can either do this in the microwave, or just lay the burrito shell over the mixture in the frying pan, kind of like a lid. Once its warm, place on a plate and put your sauce down the middle then add a layer of grated cheese.

• Remove the frying pan from the heat and layer the scrambled egg-veggie mix in the burrito shell on top of the cheese and sauce. Wrap it up and voila! A hearty breakfast to go

This is a good option when you’re not looking for a light lunch or supper, but you want something that feels satisfying. You will need:

• a bowl to mix your salad in

• salad dressing of your choice and any other spreads you might like, such as hummus, cream cheese or mustard

• a touch of hot sauce can also be great in these, for those people who like a bit of spice!

In the bowl, combine all your salad ingredients and toss with your dressing. Layer your spread(s) on the pita or wrap. Scoop your tossed salad onto the open wrap.

Top with hot sauce (if you like) and wrap it all up. Fresh, tasty, and portable.

This is the most like the traditional mix we think of when we think of burritos. The trick to keeping this one interesting is mixing up what you add to your bean mixture as well as what you use for your base.

• Add a can of beans (black beans, kidney beans, refried beans, and even chickpeas all work fine) to the pan, as well as a dash of salt and pepper, and spice such as cumin or a chipotle sauce.

• Smoosh the mixture a bit with the back of a fork to clump it together, you can also add things like some frozen or fresh corn, or some canned tomatoes.

Rice or Potato Base:

• While you are preparing your bean mix, choose and prepare the base you want for your burrito. Two easy options are rice or potatoes

• Rice is easy, just cook according to the directions on the package

• For the potatoes, we find it’s easiest to chop the potatoes (about half a smallish potato per burrito) into about 1 inch cubes, then boil them until they are tender (so that you can easily spike through the cube with a fork). Drain the potatoes in a strainer in the sink. You can either just add these to the burrito plain, fry them lightly in a pan with a bit of oil (sesame oil adds a nice flavor) or fry them with a bit of your bean mixture.

• Lime: add just a squirt of either fresh lime or lime juice as a final touch

Once your bean mixture and starch base are all ready, heat up your burrito shell. Layer the rice or potato base on the bottom, then a layer of bean mix, then toppings of your choice. The only problem you’ll have with this one is being able to close the wrap around all the yummy ingredients you've tried to fit into one wrap!!

Burritos are a great way to make your meal portable, but one important tip when you’re planning on bringing one for lunch to school or work: keep your filling separate from the burrito shell. We often find that when you wrap it all together and let it sit for more than a few minutes, things can get soggy. Instead, try putting your filling in a reusable container and packing the burrito shell separately until you’re ready to eat.

The final tip, how to wrap a burrito like a pro!

• Layer all your ingredients down the middle, trying to leave about one and a half inches of space at one end.

• Fold up the bottom half

• Finally, fold the opposite side over. You should have one open end at the top. If you don’t want it to be open, simply just fold in both the top and bottom ends for your first fold.