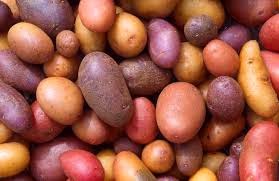 The humble potato is the fourth largest food crop grown in the world, just behind corn, wheat and rice. It is also the number one vegetable crop in the world and features prominently in the cuisines of Eastern Europe. We’ll be adding some of our favourite potato recipes over the coming weeks.

Potatoes have an undeserved reputation for providing nothing but empty, starchy calories. The Too often, they are deep-fried in oil or smothered in high fat foods like butter and sour cream which contributes a great deal to their “unhealthy” reputation. Take away the added fats and the potato emerges as a healthy, low calorie, high fibre part of our diet. In addition, one medium sized potato provides nearly one-third of the body’s daily requirement for Vitamin B6 which is used to build cells and many of the chemicals needed by the body, including the brain.

Potatoes are often sold in plastic bags at the grocery store. This remains a Kitchen-pixie pet peeve as plastic bags, even if they have holes in it, encourage moisture to build up which rots the potatoes. If you buy potatoes in a plastic bag, transfer to an open potato bin or a paper (or burlap if you can find it) bag when you get home. Potatoes should be stored in a cool, dark place such as a closed closet or cupboard. Even room temperatures will encourage the potatoes to sprout; however, the refrigerator is not where you want to put your potatoes. Under refrigerator conditions, the starch in potatoes is converted to sugar and they will taste funny. Also, try to store them away from the onions as the gases each vegetable emit will reduce the quality of the other.

In the grocery store, look for potatoes that are firm and relatively smooth without any signs of sprouting or green discolouration. The green tinge to the skin is a sign that the potato has been exposed to sunlight and may have produced a chemical called solaine that gives potatoes a nasty, bitter taste and can be poisonous if eaten in quantity. If you can (and it’s getting harder to all the time), avoid purchasing “pre-washed” or “already cleaned” potatoes. First, they are more expensive per pound than potatoes with the dirt still intact. Secondly, washing removes a protective layer on the potato skin which allows bacteria to spoil the potato. Finally, you are going to wash them anyway so why pay extra for this unnecessary “service”.

Most of the nutritional “goodies” of the potato are found in the skins so if possible, cook them with the skins on and eat the lot. Scrub the potato well under cool running water and remove any obvious areas of damage with a small sharp knife. If you need to peel them, use a vegetable peeler to remove as little of the skin as possible. Potatoes darken if they are cut and exposed to air so peel them just before cooking or put them in a pot of clean water until you’re ready to cook.

1.       Baking potatoes: also called starchy potatoes, floury potatoes, jacket potatoes, Idaho potatoes. These potatoes tend to be long in shape and have a coarse, cork like or netted texture to their skins. They have a high starch content and cook up with a light, fluffy texture. They’re idea for baking, mashed potatoes or French fries. Some of the names you’ll see on these potatoes are Russets, Idaho Russets, or in New Brunswick, Netted Gems.

2.       Boiling potatoes: also known as waxy potatoes, fingerling potatoes. These potatoes tend to be round in shape with thin skins. They hold their shape better when cooked which means your potato salad won’t turn into a bowl of mush. These are ideal for use in soups, stews, potato salad, roasting, and barbequing. Boiled and mashed, they tend to be lumpy instead of smooth and creamy. Names you’ll see for these potatoes is round white, round red, red potatoes, salad potatoes.

3.       General purpose potatoes: these are the “middle ground” when it comes to starch content. These are moister than baking potatoes and still hold their shape when boiled. Common varieties include Yukon Gold and Peruvian Blue, Kennebec, and Katadhin.  They can be baked, mashed or fried but will not bake up with the same fluffy lightness as the bakers.

4.       New potatoes: (also called early potatoes in Britain). These aren’t really a separate variety. An immature, small potato of any variety is a “new potato”. They have thin, easily eaten skins. There hasn’t been time for them to convert sugar into starch and they have a very high moisture content. As a result, they do not store as well as fully grown mature potatoes, so try to use these ones up within a week of purchase.  They make a good boiling potato but will be disappointing if baked or fried.

Posted by The Kitchen Pixies at 10:00